While Others Struggle With COVID, Rich Indians Flee In Private Jets Amid Rising Airfare

Airfares soared and demand for private jets boomed on Friday as Indians who could afford it scrambled to escape a Covid surge before flights to the United Arab Emirates and United Kingdom shut down.

All flights from the UAE to India — one of the world’s busiest air corridors — will be suspended from Sunday as coronavirus cases in India reach record levels and overwhelm hospitals.

Price comparison websites showed one-way commercial flights from Mumbai to Dubai on Friday and Saturday costing as much as 80,000 rupees ($1,000), around 10 times the usual rate.

Tickets for the New Delhi to Dubai route were going for more than 50,000 rupees, five times the normal level.

No tickets were on offer from Sunday when the 10-day flight suspension comes into force.

“We have 12 flights going to Dubai tomorrow and each flight is completely full,” the spokesman said.

‘We have requested more aircraft from abroad to meet the demand… It costs $38,000 to hire a 13-seater jet from Mumbai to Dubai, and $31,000 to hire a six-seater aircraft,’ a spokesman for Enthral Aviation, another provider, told AFP.

About 300 commercial flights a week usually operate between the UAE and India, according to local media.

The UAE is home to roughly 3.3 million Indians who make up a third of the population – most of them in Dubai, one of the seven emirates that make up the federation.

The UAE’s General Civil Aviation Authority said those coming from India through other countries must stay in that third destination for at least 14 days.

A fleet of jets flew from Ahmedabad, Delhi and Mumbai into London Luton airport – with one aircraft touching down just 40 minutes before the deadline was imposed. Desperate passengers chartered the aircraft from Qatar, Germany, Malta and one belonged to a private owner, leading to the sky-high demand. India was added to the UK’s travel red list at 4am on Friday, meaning arrivals from the country must now enter quarantine in a Government-approved hotel for 10 days. 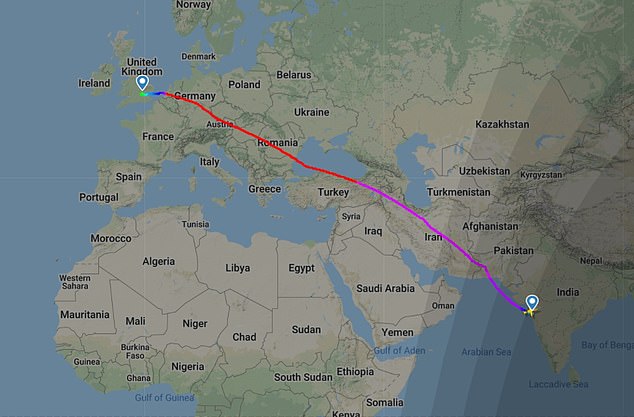 Four airlines asked for a total of eight extra flights to arrive at Heathrow before the 4am cut-off; however, it is understood that Heathrow declined the airlines’ requests to ensure existing pressures at the border were not exacerbated.

Anyone who is not a UK or Irish resident or a British citizen will be banned from entering the country if they have been in India in the previous 10 days.

Private Plane: Where Do Private Jets Land in NYC?