Already, most European airports have received support financially. The United Kingdom Minister of Aviation announced the financial aid scheme that has been put in place for UK airports. This happened after the industry seek urgent assistant following the new travel restrictions that came into force on 18th of January 2021.

UK Aviation Minister, Robert Courts said, “The Airport and Ground Operations Support Scheme will help airports reduce their costs and we will be aiming to provide grants before the end of this financial year”. 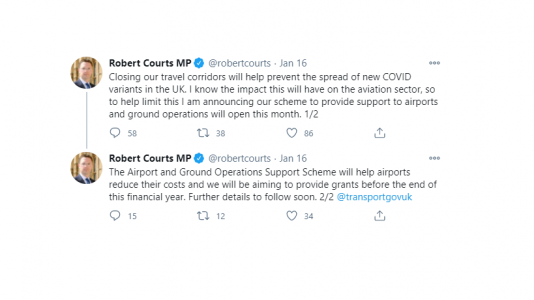 Immediately after (AOA) Uk’s Airport Operators Association had called for government support due to COVID-19 tightened rules, the decision was made to make available financial aid to UK airports. The Airport Operators Association explained that the airport might not be able to provide crucial and important services without the government assistance.

Currently, there’s a huge downward plot on traffic chart of the number two largest airport in London, Gatwick Airport (LGW). Gatwick Airport suggested that the support from the government would help keep jobs at the airport, which will make operations continue running smoothly. 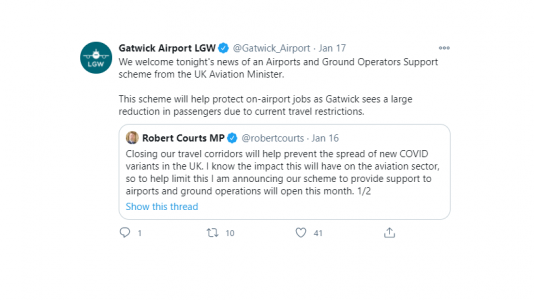 UK travelers must provide COVID-19 medical clearance from 18th January 2021 and they should self-isolate for 10 days, notwithstanding new testing requirements.

Through the Temporary Framework rules by European Commission that allows European governments to assist companies affected by COVID-19 pandemic, most EU countries have been able to aid their airports. So, the UK government isn’t the very first.

The European Commission endorsed an aid scheme to support Danish airports in September 2020. With a budget of €4 million open to all Danish airports, they’ll be serving scheduled passenger flights within and to and from Denmark.

EC authorized a scheme to support German airports partly under Temporary Framework. German authorities were able to either compensate airports for revenue losses caused by the COVID-19 pandemic or provide liquidity support in the form of grants, loan guarantees.

In November 2020, the European Commission has approved, approximately €4.4 million Romanian aid scheme to compensate Romanian regional airport operators for the damage suffered due to the COVID-19 pandemic. The Romanian authorities were able to compensate those airports for the net losses suffered during the period between March and June 2020.