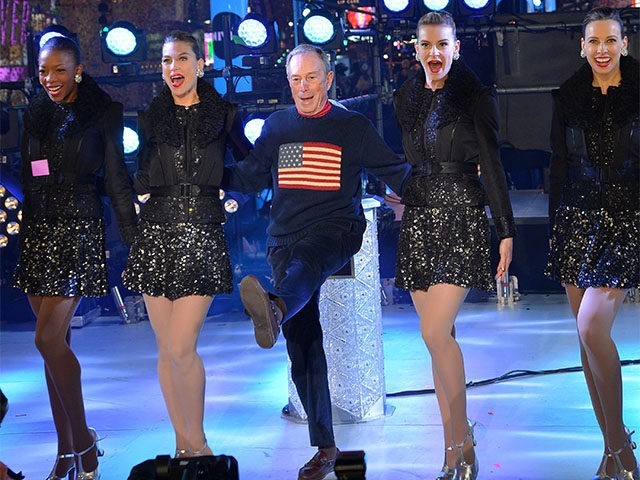 Billionaire Michael Bloomberg, worth an estimated $54 billion, enjoys his own fleet of private jets and helicopters stationed in New Jersey while describing himself as a “global leader” on the environment and climate change.
Bloomberg, who has pledged to end the American coal industry, has for years flown around the world to his multiple million-dollar mansions in the comfort of his own private jets and helicopters — ditching commercial flights and trains that working and middle-class Americans use to travel.
In 2012, the New York Times detailed how Bloomberg would jet to his $10 million Bermuda mansion in his $42 million Dassault Falcon 900 private plane about twice a month on the weekends while he was mayor of New York City:

Private jets have practically become de rigueur among the elite; everyone who is anyone either owns one or charters one regularly. Mayor Bloomberg is no exception: his trips to Bermuda aboard his private jet often fill in the blanks on weekends when he has no public schedule. [Emphasis added]

Inside Sources described in January how Bloomberg’s private jet likely “generates an estimated 37 times more carbon emissions than the same trip on a commercial flight.” As for Bloomberg’s $7 million AgustaWestland AW109, the helicopter “burns a jaw-dropping 72 gallons of fuel every hour,” according to the report.
Since the early 2010s, Bloomberg has been on an exclusive waiting list to get his hands on the AgustaWestland AW609 Tiltrotor helicopter, worth anywhere between $5 million and $30 million.
It is not just private jets and helicopters that Bloomberg favors, it is also yachts. In 2014, the New York Times reported that Bloomberg chartered a two-story yacht through the waters near Turkey:

After his breakfast with the anti-tobacco activists, Mr. Bloomberg kicked back on a huge two-story yacht procured by staff members to take him from his hotel on the Bosporus to the next event on his schedule: commencement remarks to be delivered at Koc University, an elite institution founded by the billionaire Rahmi Koc, his friend and fellow alumnus from Johns Hopkins University. [Emphasis added]

According to Business Insider, Bloomberg once owned 14 properties and homes around the world, including an Upper East Side five-story mansion which he renovated for nearly $2 million, a $25 million London, England, mansion, and a $20 million estate in Southampton.
Bloomberg’s efforts to eliminate the coal industry in the U.S. would decimate the jobs and livelihood of about52,600American coal miners who have prospered in President Trump’s “America First” economy. Thanks to Trump’s pro-American energy agenda, the coal industry has stabilized, according to United Mine Workers of America (UMWA) President Cecil Roberts.
Share
Facebook
Twitter
Pinterest
WhatsApp
Previous articleJetSuite’s JSX sets group private jet charter partnership
Next articleFoundersCard: 10% discount on BA, free JetSmarter private jets, Hilton & Marriott Gold
- Advertisement -