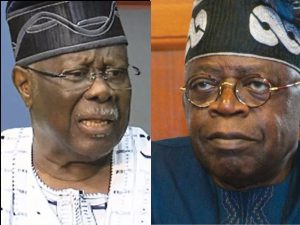 Speaking to Arise Tv, the former army general said that the system was not working and needs to be looked into, he also criticized Alpha-Beta, the Company of the national leader of the All Progressives Congress, Chief Bola Ahmed Adekunle Tinubu.

He said the company is in charge of collecting the internally generated revenue in Lagos and grosses around 40-50 billion a month, taking 15% of that every 30 days, describing it as sacrilegious. He added that the money collected from the TollGate is enough to have since paid off the loan money for the Tollgate.

The former Ondo state Military Governor said that Chief Bola Tinubu has 3 executive private Jets, with one able to fly from Lagos to New York, and he does not understand where the money comes from, he also criticized the amount paid to each governor as a pension at the end of the year, making comparisons with his #400.000 he receives monthly as a retired army general, saying it is nothing compared to that of Governors.

He also criticized the daughter of APC national Chairman, Folashade Tinubu who he said has no track record to be the Ìyál’ọ́jà of Lagos, a Yoruba word that literally translates to “Mother of the Market”, adding that she never had a single kiosk in Lagos and has no market experience.

He also criticized the son of the APC Leader who he said controls the whole signage of Lagos and described it as not justifiable and makes no sense. He also said the first shopping mall constructed by Brigadier Mobolaji Johnson has been turned to where Seyi Tinubu keeps his private horses.

Chief Bode also said that he and his friends will make sure that those who lost their lives at the Tollgate will have a permanent monument there to honor them.